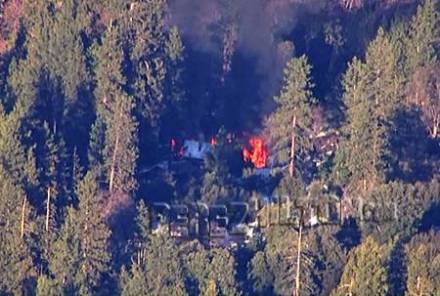 Christopher Dorner has been burned alive without receiving a trial or anything close to due process of law. As more audio evidence surfaces of police officers screaming; “Burn that mother fucker down!” The more it appears to resemble a public lynching. It baffles me because we constantly speak of progress being made on the racial front in America and we point to Barrack Obama sitting in the white house as proof of this but the Oscar Grants continue to happen. The Trayvon Martins continue to happen. The executions continue to happen.

I should say before I continue that Christopher Dorner was a terrible person at the time of his death. He was a narcissist who used corruption within the LAPD as a springboard to express his admiration for Ellen DeGeneres and Tim Tebow. He killed an innocent couple and one has to draw the conclusion that he did all of these things, in large part, for personal fame. Moreover, Christopher Dorner should not be considered a revolutionary. Nor should he be considered a martyr. With that being said Dorner should also never be called a liar.

He spoke of wanton discrimination within the Los Angeles Police Department and called out a fraternity in blue that had been allowed to operate with impunity even after the Rodney King beating and subsequent riots shined a spotlight on the department enabling the whole world to see the atrocities that they were allowed to get away with. And even if we dismiss “The Christopher Dorner Manifesto” as crazy talk from an attention-hoarding lunatic, we surely cannot dismiss the fact that police departments around the state of California were aiming to kill him. Bringing Dorner to justice was never an option. Torrance PD proved this when they shot two Hispanic women on sight—one of them 71 years old—because they thought they were the fugitive. This should indicate to the general public that law enforcement feared what Dorner might say in trial or the in letters that he may have sent to loved ones on the outside. The officers who he would have surely implicated feared for their careers. Basically Dorner knew too much therefore he had to go.

In instances such as this one we must be careful not to read the world as if it were a Marvel comic book. That is, there is no such thing as pure good versus pure evil. We cannot say that Dorner was justified for targeting the families of the same police officers that he claimed ruined him. We also cannot say that the LAPD was justified when they cornered the accused cop killer into a cabin and shot several canisters of flammable tear gas at the structure until it started a blaze that ultimately burned him alive. (For the record I am aware of accounts of a single gunshot being heard sometime shortly after the blaze was ignited which would suggest that Dorner might have actually committed suicide. However it doesn’t really matter. The intentions of the LAPD were to burn him up. There was no attempt to wait him out or to thoroughly negotiate his surrender).

Christopher Dorner is dead but justice surely hasn’t been served. With each murder of someone deemed a terrorist be it Osama Bin Laden, George Zimmerman’s worst nightmare Trayvon Martin, or whom ever else, we move closer and closer to functioning like the fascist countries of the olden days and those third world countries that we are supposed to be showing “the light of democracy.” As a nation we need to quickly check ourselves before our collective belief in the constitution itself is murdered by the disenchanted masses.