I recently paid for my daughter to go to a very cool summer camp and I suppose I should feel good about it but I don’t. I mean I do feel good about it. I feel great about her going to summer camp and having the opportunity to swim, hike, fish, and sing goofy songs but I’m not the least bit excited about the part where I pay for it. I know that being a good parent is all about sacrificing but sometimes it’s painful.

But stunt for what? And stunt for whom? Alas, I realize that for the first 22 years of my life my main goal was to impress females. To dress in a manner that begged them to pay attention to me. To put myself in the places that I knew they were going to be, to convince them that I wasn’t as insecure as I always felt. But now, in my 31st year on this Earth, I understand that the only female’s opinion that truly matters is that of the one that was born unto me. When I am stressed I always keep her happy. I aim to liberate her consciousness on days that I feel as trapped as my brothers in the penitentiary. I love that little smart mouthed girl and I hope that when she is an adult she will be able to appreciate all of the daily sacrifices that are being made in order for her to have an amazing childhood.

Sometimes thoughts explode in my head like firecrackers packed with blinding light and other times they wash over me very slowly. This one took about three years to finally reach the shores of my conscious mind but in order for you to fully understand its significance then you must know a little bit about me.  I’ve been a parent nearly my whole adult life, and for most of those years I have been single. Therefore I have been on several dates with a car seat in the back, and I’ve invited a few women over the house on Saturday nights after my daughter has gone to sleep. Over the years I’ve hung out with women and gave them a lot of my time but almost none of them have ever met my little girl. I’ve kept the two entities separate for multiple reasons. The most important by far being that I never feel like the woman that I am dating is worthy enough to meet my daughter. I don’t look at her and see the lady that I want my daughter to be. And this is what brings me to my point.

The concept that I have just recently grasped is this: If the women who I date are not worthy of meeting my daughter then I should not be dating them.

Last night I was helping my daughter with her homework. It was a writing assignment in which she had to describe the appearance of her room. After reviewing the rough draft I told her to tell her reader where exactly the things in her room are located instead of just saying they are in her room. For example; Instead of saying you have a map of the world in your room say that you have a map of the world hanging on the wall above your bed. She took my advice and wrote what I thought to be a stellar piece. That was yesterday, today I had to give her back.

Specificity is the focus on small things, the ability to pay attention to details that the average person may not notice in order to positively affect the story at large. I only have about two days a week to spend with my child and I spend a significant portion of that time at work. I know that I am positively affecting her life. I know that I am going against the odds as a black man who chooses to handle responsibility and be a father. Yeah I know all of that stuff. I hear it all the time and that’s great. But it’s hard to feel like a father when the court gives you no more that 48 hours to be a parent. It’s hard to adjust to not having any real say in her life outside of what I say in those two days when I’m with her. It’s hard to not feel depressed every week when I kiss her goodbye and she goes to her real home.

Some men can’t deal with the trauma of having their parenting rights dictated to them and honestly I can’t blame them. I can’t say I never thought about checking out of the situation. It’s strange because everyone wants to judge absentee fathers but no one really wants to understand them. I mean how cruel does a system have to be in order to make a man want to leave his children? How is it that fatherhood has become so dispensable in the court of law? I don’t know. I try not to think about it. All I try to do is make my two days count. 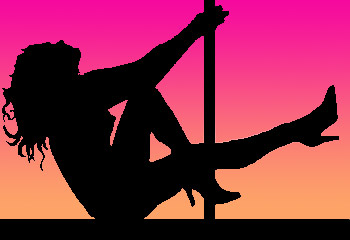 I expose my 7-year-old daughter to as many things as I possibly can. We go to the Museum of African Diaspora together, and she has already been to several readings and open-mics. The girl paints, creates music, plays soccer, and loves math. Like all good fathers I try to be as supportive as possible. Even though her mother and I split several years ago I have always been a consistent presence in my little girl’s life. This is mostly because of my love for her and my strong desire for her to one day be a successful woman but it is also driven by an uncontrollable fear. I want my daughter to be talented and I want my daughter to be artistic but I do not want my daughter to become a stripper.

Over the past decade no institution –besides the penitentiary—has come to symbolize the failure of African-American father’s more than the strip club. Stripping is big business in every American city but it is even more lucrative in the Southern United States where a disproportionate amount of blacks either reside or send their children to Historically Black Colleges and Universities to be educated. There is a whole subgenre of hip-hop music made specifically for strippers to dance to; Pop Lock and Drop It, Rock her Hips, Shake it Like a Salt Shaker, Back That Thang Up, and a dozen other booty worshipping songs that cause me to quickly change the dial every time my daughter is in the back seat. “But I like that song Daddy,” she often says. “Well I don’t,” I tell her. At least not with her in the car I don’t.

The role of the stripper in society has been reinvented in the modern-era which adds a whole different dimension to my worst parenting nightmare. No longer is the stripper’s pole reserved for the neglected, tragically beautiful, young lady who grew up in foster care. Instead there is a huge cross-section of sisters who find themselves flinging their bodies from the stainless steel sphere and landing in a perfect split. There are graduate students, daughters of the bourgeoisie, former high-school athletes, and aspiring entrepreneurs all collectively making it clap for crisp new bills. Alas stripping has become a completely socially acceptable profession.

Not that I have anything against these women. I honestly believe that it takes a tremendous amount of swagger for these ladies to dance naked in front of total strangers as if they were dancing alone in front of a mirror. So many women have extreme insecurities about their bodies that it is somewhat refreshing to see females shake it with pride. My only issue is that I am scared that the incessant stream of black women dancing half-naked in music videos, and on billboards, in magazines, and in low-budget hip-hop movies, will force a whole generation of girls to think that is their only option in life.

No longer will young African-American females want to win gold medals like Dominique Dawes and Gail Devers. They won’t know that they can go to outer-space like Dr. Mae Jamison or make millions of dollars by starting their own business like Madam C.J. Walker. Instead they will think the only way they can get rich is by catching a hand full of bills thrown to them by some drunken rapper who was gracious enough to “make it rain” all over their once sacred bodies.

Needless to say I do not want that for my little girl. I want her to defy societal expectations and choose her own path. I want her to be socially outgoing yet ferociously independent. I want her to be proud of her culture while at the same time being aware that her people need her help. The last thing I want to do is fail like so many other black men.

Sometimes I close my eyes and I am haunted by the fact that every stripper had a daddy once. It is oh so troubling.