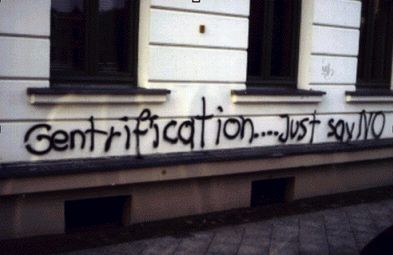 It’s strange to me that it’s now considered cool to live in my hometown of Oakland, CA. When I was growing up it was just dangerous. There were very few young “hip” people who were brave enough to move into an area that was known as one of the most notorious ghettos in the state of California. Even the people who lived there didn’t want to live there. A small two-bedroom house on the Eastside of town was the last place my mother wanted to raise her three children but what else could she do? Housing discrimination was a lot more blatant in the late 1980’s. Meaning no realtor was going to show her a property in Napa or Piedmont.

So we ended up moving to a street that was relatively quiet however trouble was never far away. On every major thoroughfare around our home there was drug dealing and wanton violence. I was only allowed to ride my bike down half of our block. My sister and I often times watched TV on the floor because we heard gunshots outside and didn’t want to get hit by a stray bullet. I witnessed so many crimes against humanity just trying to get from the bus stop to my house that I’m still unable to completely process it. Somewhere along the way Oakland has both traumatized me and desensitized me but now all of a sudden it’s the place to be for young people who want to be involved in some kind of cultural adventure.

I guess my main issue with those hoards of upper-middle class bred white folks who have come to gentrify certain sections of my city is that everything I experienced in Oakland has been real—real death, real poverty, real loss—while what they want to experience seems very superficial. To live in a brand new town home that was erected in a space that used to be a housing project while telling your friends that you stay in the ghetto is tantamount to a person going on a Safari and saying that they braved the harsh jungles of Africa. I feel like some of these people are trying to capitalize off of my pain and it makes me nauseous. There is way too much dried blood on the streets of this town for people to act like it’s charming. I don’t think they’ll ever understand.