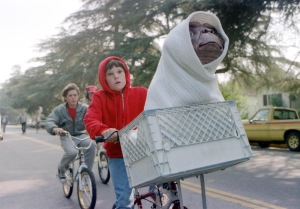 Today was one of those rare days when I get a chance to hang out with my daughter for literally the whole day. She’s out of school for the summer and I’m out of work so things kind of worked out.

After we ran a few errands we had options for leisure time. Last week she asked me if we could go see the movie Cars 2.  I told her I would think about it which I did. I ended up coming to the conclusion that a movie about talking cars sounds lame as hell. I just wasn’t feeling her selection but the idea was cool. I mean there’s nothing wrong with taking in a good film every now and then. I tried to come up with a movie that we could both enjoy and preferably one that was free.

Initially I thought we would have to watch The Lion King for the 75th time but when I reached for the DVD I saw something even more classic—I saw E.T. on VHS. Yes I still own a copy of The Extra-Terrestrial and yes I still own a VCR. I got a few Klondike bars out of the freezer and it was on and crackin.

This world we live in is so fascinating. Things change so rapidly that you can’t depend on anything anymore. You can’t depend on having a job because the economy is so bad, you can’t count on gas prices staying under $4 per gallon, global warming makes the weather extremely erratic, and because of light pollution you can’t even depend on looking up and seeing the stars at night. That’s why I can’t express how refreshing it was to see the look of enchantment on my daughter’s face during that scene in the movie when those kids were riding their bikes and out of nowhere they took flight and soared over the police barrier.

It’s crazy because it’s a 30-year-old movie but for her it’s brand new. It’s also crazy that I am a soon to be 30-year-old man but because of my little girl I feel brand new. The power of great art is truly immeasurable. I would imagine that it is only rivaled by the power of love.