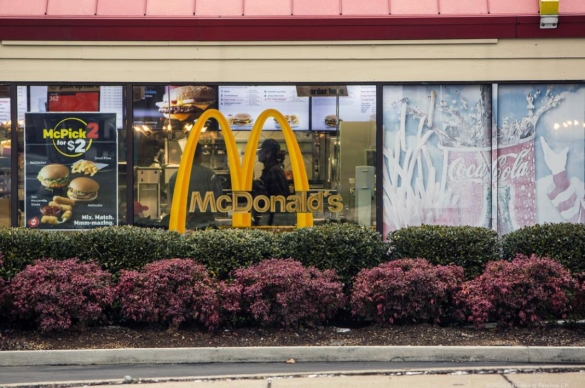 I was at the McDonald’s on 14th and Jackson and I was hella disappointed because anytime I’m eating at McDonald’s something has gone terribly wrong. Like I forgot to bring my lunch to work, or I ate my last meal at 3:00pm and mistakenly thought that I would be full all night but now my 6:00pm lecture is less than an hour away, and I question whether or not I can be on my feet for 3 ½ hours without more food. So, on this day I panicked. I walked down the street and around the corner to Mickey D’s.

I suppose I could have gotten inside my car and drove to Lucky to buy a chicken salad, but then again fuck salad. I don’t even like salad. I’m one of those strange people that believes eating should always be pleasurable. No matter what you say about the negative side effects of fast food and how it doesn’t decompose and how the chickens are treated—Yo! That shit tastes good. The fries are magnificent and the sweet and sour sauce is the best thing to ever happen to a nugget. McDonald’s is cheap and there’s always one nearby. They say that relapse is a part of recovery so on this day I went on a binge like Pookie in a Crack house. “It just keep calling me.”

At any rate, I’m sitting at my table eating my food in record time so I can get back to the college where I teach before my class starts, when this brazen unsheltered man walks to the back near where I am. He’s white, mid-thirties, sagging pants and has a confident gait that seems to move him from side to side rather than forward. One of his hands is holding up his baggy pants while the other is free. He goes up to a table of four older Asian men and says in a forceful voice with three fingers out as if he is about to pick something up “Aye, can I get some of them fries!” Then he actually puts his nasty ass fingers on their tray and gets some fries. I am astounded. In a city full of homeless people, I have never seen anyone living on the streets do such a thing. I was perplexed. Was this white privilege? After all a shocking 70% of the homeless population in Oakland is African-American, so maybe this guy viewed himself as a member of the homeless elite.

Even though this man was addicted and down and out, he felt like he was above begging in front of the McDonald’s like all of the darker skinned homeless folks. He was entitled enough to walk in and take what he thought he deserved. This was all conjecture on my part. Obviously, I didn’t know anything about his thought process. Then he looked at me and I got the same feeling that I’ve been getting since elementary school when I know there’s about to be a confrontation. It’s a moment of intense anxiety and instantaneous preparation for battle. Because no one was going to touch my fries. I would have given him every dollar in my pocket but if he would have touched one French Fry there is no doubt in my soul that very bad things would have happened to that man. Bad things that would have made me drop to my knees and pray for forgiveness after it was all over. However, he did no such thing. Our eyes locked. My right hand held a freshly dipped nugget. My left hand was clenched into a fist on my lap. It was a real Tombstone-esque Doc Holliday showdown moment. I took a swig of my small coke until it made that slurping sound that you hear when there’s nothing but ice. Then he looked away and gangster walked toward the front of the restaurant.

I didn’t see it coming. Why did he retreat? Surely he wasn’t full. Was the beat down that I would have given to him conveyed through my eyes? I doubt it. I can’t look intimidating to a homeless dude. Especially since I had on a collared shirt, slacks, and hard soled shoes. I mean I had a damn nugget in my hand. Was it because of my race? Did he feel more comfortable extorting French Fries from four Asian men than one lone African-American gentlemen? Or was he under the impression that my French Fries were below him because they were tainted with my blackness. Similar to those southern whites that wouldn’t let negroes swim in their pools during segregation because they thought we would dirty up their water. Was this unsheltered white man a southern transplant that moved to Oakland to avoid the comparatively harsh winters of rural Virginia? It was all very confounding. What was going on with me? Did I actually want to fight this man or at the very least verbally reprimand him for plotting on my fries? And why was I willing to land an overhand right on a man who was at the absolute bottom of society for a few pieces of fried potatoes? And there it was.

My anger stemmed from the fact that he was not on the bottom of society. Though he may have lost his family, fell into depression, been priced out of his home, and abused drugs and alcohol just like any other person living on the streets—he still had his whiteness. And his whiteness was enabling him to separate innocent people from their French Fries. This made me irate. That’s why I wanted to confront him. It wasn’t about that crispy goodness or even the four packets of ketchup that my fries were doused in—it was about the culture. I was there on 12th and Jackson ready to defend my culture from this white, delusional, French Fry Jacker.

I was ready to get down for mine

I live in a house

Yet in his eyes, he still had something over me and every other nonwhite person in that restaurant. He had placed himself at the top of the homeless hierarchy. Or maybe…maybe he was just really, really hungry. Two more minutes had passed and all of my food and drink were gone. I left the restaurant totally full and ready to lecture. Feeling like I had proven something to myself—but only to myself. I had gotten the victory. I had consumed all of my fries, but not in peace. For my mind was full of turmoil. Among many other concerns I wondered was that homeless man feeling like he had lost? Did it even matter to him at all? I may never know. And in this lifetime, on this earth, in this country that we call America, inside that McDonald’s in downtown Oakland—that will have to be enough.